HERE'S WHAT RIDERS ARE SAYING ABOUT THEIR MOTOBIKEJACK

My Name is Ray Lyons, I Developed the MotoBikeJack for my own personal use stemming from my inability to lift a 1000 pound motorcycle once it had fallen. My back went out when I was trying to walk it back up and it still bothers me to this day. When I thought of offering the MotoBikeJack for sale I was told that most Bikers would be too proud or macho to admit they needed some help lifting their bike. These following comments sent to me via E-Mail over the past 7 years make my heart warm and validate that I am not the only one who had been looking for a solution. So PLEASE, once you receive your MotoBikeJack and see how easy it is to use, send me an E-Mail with your comments. I would really appreciate some pictures too,  Thanks in Advance. I truly value all your feedback and comments. Ride Safe and Happy.

I ride dirt with herniated disks. The biggest concern is dropping the bike with no one around. I laid my bike down flat on its side and fully loaded In the garage. This tool picked it up no problem! Best money I have spent on a MC accessory. I am surprised it’s not in the aerostich catalog.
Logan O.

Ray, this jack is worth it's weight in gold.  I already have one and had to use it a couple of times.  Now I'll have one in each big Harley.  Great product.   Thanks.  Richard B.

Great product my FJR1300 is almost 700 pounds way too heavy for me to pick up. I store it in my top trunk for access in case the bike falls over and I have the jack stored in the side bag the bike is laying on. Louis B.


I am very pleased with the MotoBikeJack. The quality of this product is excellent. The ease of use is wonderful. I'll admit I was a bit skeptical at first. But when I received it I went and put it to use. I took my bike (2019 Ultra Limited) and laid it on the ground, followed the instructions and brought it up with no problem. It was easy and quick.(sorry I didn't take any pics) I am very glad I purchased this and I would highly recommend it to anyone. Thanks for making such a great product.  Mike S.

Hi there,
I ordered a jack from you recently after realizing that I could barely lift my bike off a flat surface on a good day, and I wanted to thank you for making something like this; I ended up having to use it yesterday when I decided to try riding through a bunch of sand mixed with ash.
It worked very well once I figured out which side to put it on, especially considering that the bike was all the way over and the sand was soft enough for the kickstand to sink in a few places
Will R 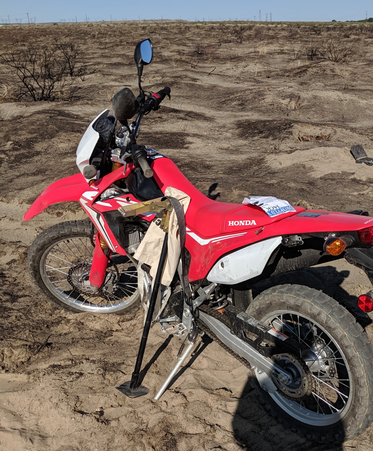 I think this is one of the best purchases I’ll ever make.
I’ve been across the U.S. three times and I know what obstacles ,as a solo rider ,you may encounter.
They teach you to pick up your touring motorcycle in a controlled environment but, in reality’,
Loose gravel, sand, oil, are some of the hazards that may prevent you from doing that.
Enter; Motobikejack,
Now ,I am confident that if that happens to me, I will be able to raise my bike without getting hurt or needing assistance from others.
Great idea! Thank you.
M.Stoyanoff
____________________________________________________________________________________________________
I upgraded from a Sportster to a a new Ultra. While excited, after taking delivery, I quickly found big differences in handling the bike. After a tipover, I researched the easiest ways to get the bike upright while riding by myself. I didn't like the methods I found that risked damaging the finish of the bike.
I found the MotoBikeJack and decided to order one. I tested it and couldn't believe that not only could I do it, my 10 year old daughter could as well. I've become a much better rider now but we all have situations where the bike goes down. Now, I can get it done in about a minute.
Thank you for designing such a great product! 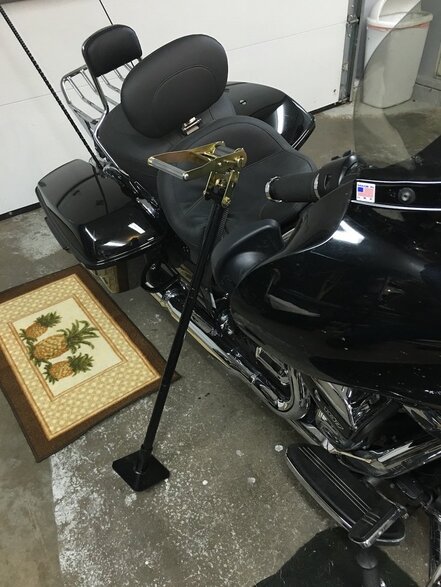 So Ray, is there a word beyond ecstatic??? The post office people said how about “really” ecstatic??! The jack worked a treat. The bees knees!
So to be smart, I tried it first on the lighter and smaller Suzuki DR200. This bike lies very flat when toppled over so it took a bit of fussing to find the hook attachment point under the fallen bike. But when I did the bike went up effortlessly...one handed ratcheting. I kept a foot on the base all the way up. But I was on grass so the base dug in and allowed me to take my foot off to turn my hip to the final push up to vertical!! Voila! One bike up.
I knew I must keep the jack accessible at all times so I placed it in the top Pelican case on the rear rack on the bigger Suzuki DR650. I had 3/4 of a tank of gas in the large IMS aftermarket tank. I tied off the front brake, lowered the bike onto its left side, and proceeded to get the motobikejack out out of the top case. The jack goes together very quickly. The DR650 lies a bit higher off the ground when horizontal than the DR200. I had figured out where best to put the hook ahead of time and it was easily hooked, then the ratcheting went very easily with two hands. One hand can do it if I just don’t raise the ratchet to its full throw. That bike was up before you could say jiminy cricket! My partner did not come out to help me at all as he said the experiment needed to simulate a real world fall over and recovery. So thank you so much Ray for this fine lift. Now I can travel solo without worry about falling over in a remote spot. It just may have saved me a lot of money too as I do not need a lighter bike than the DR60 now for my travels!
(These comments are  From SueH in Canada, a 70 year Young Rider!!)

I now feel better heading out by myself knowing I have a back-up if I drop my bike (BMW f800GSA). The Jack seems very well build. Very solid, good quality materials and components. Takes up very little room (I'll be storing it in a dry bag strapped to my rear tail rack).
_____________

I bought this for my husband after I surprised him with a full dresser for our anniversary. The bike is so much bigger and heavier than our '66 Shovelhead chopper, I thought having a back up lift would be good insurance. Well, I was out and he went down in gravel and said there was no way he would have been able to get that monster upright. Surprise! He said this lift was easy, convenient and did its job as advertised. It paid for itself this one time. Thanks guys for a great engineering!
______________

530 lbs of dirt bike. Hell yes it works. I got stuck in the middle of nowhere  last year and would  have payed triple the  price to have had it. Great product, won't ride alone without it.
Thanks Mal
______

Arrived on Time Item as Described Thank you for a great invention!!  You need to approach Harley Davidson and Honda.  I had to look long and hard...  I know of other bikers who would love this.
_______

With my arthritis and lack of mobility, your Motobike jack is just what the doctor ordered.  I can go anywhere now and not worry if I do drop my bike with no one around.  It really does give me piece of mind.  I do have a big ride planned for this coming weekend.
______
Awesome seller!! Placed my order on June 1st (expected 1-2 week delivery time), got my MotoBike Jack on June 4th!!. Thank you so much!!
______
Item came as described. I'm happy with my order.
______
5 Star seller. Arrived fast. Product exactly as described. Great communication too. Recommended highly
Love it, using it every day!
______
Seller was true to his words on the items description and condition. After the purchase, I e-mailed the seller asking if he could ship it that same day and with out obligation to do so, he responded immediately that he would and he did. Because of his great service, I received the item a day before I went on my camping trip. The service is one of the best I've ever received!
Great seller, would do business again.
______
Thanks Raymond.  Lift arrived and it looks pretty darn simple.  Sweet.
______
Thank you for your timely shipping of the MotoBikeJacks -I received them on Saturday.  Even if I never need it I will get my money's worth in peace of mind.  My wing man thought they were a little pricey but gladly pealed out the money.  I will carry your add in Rider magazine and spread the word, because I'm not the only old fart willing to give up my motorcycle simply because I cannot pick up my bike.
Thank you.
_______
Thank you for the quick service,, I am 81 years old and love to ride my wing, but I have been afraid to ride it much, as it fell over on me a while back and I had a rough time getting it up. so sure want to try this Jack
______
Look forward to having the security of your Jack being available in case I need it. Thank you for your invention.
______
This thing is a life saver and can keep me out in the street getting help to pick the bike up.  Doesn't happen often but when it does.  I used the jack to raise the bike from the side stand to horizontal using the rear crash bar as most of the weight is towards the rear wheel.
______
Got the MotoBikeJack; tried it a few times and am amazed. I hope never to drop the bike again but "when I do!".....
Kinda' like motorcycle Viagra...... Helps to get it up and going. Thanks.
______

I have been waiting for a product like this to come to market and when I first saw it in American Iron magazine my order was placed shortly thereafter. When it was delivered, I was happy to see the good quality and ease of storage because of the way it comes apart - EASY & COMPACT, so storage is quite easily managed. Since I am soon to be 70, I do not want to risk a back injury by helping someone (or me !) get their fallen bike back upright. I hope I never actually have to use it, but if there is an opportunity to help someone with a fallen bike, I can. MotoBikeJack is a well made product that is the smart way to right a fallen bike.
________________________________________________________________

I have found this motorcycle jack to be easily stored in one of my saddle bags. It Is easily put together and although I have not used it, I believe it will do what I needed to do, if I ever need it, to pick up my Honda Goldwing.

I found the jack to be extremely well made of good quality steel. First job was to put it together and make sure everything fitted right and ratchet worked fine.I intend to carry the jack on all our club runs as we have had bikes fall over and accidents that tipped bikes over.The jack is perfect for the job and looks like it will out live me!. what a great idea. I give it 10 out of 10. Alan